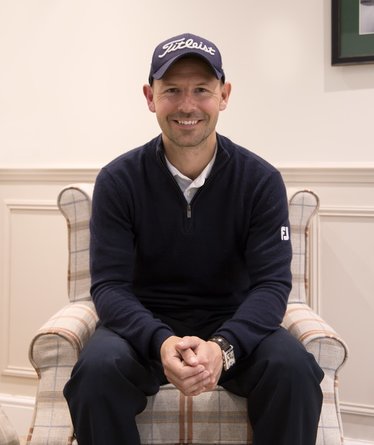 ​I was almost 14 when I first picked up a golf club and remember, even then,  being very interested in figuring out what other players did well, as well as what their playing challenges might be.


I spent almost four years playing at amateur level - representing my county at adult and junior level, and captaining the under 18s side - before turning professional at the age of 18 and undertaking my PGA training at the beautiful Woodbridge Golf Club in Suffolk.
By the time my training was complete I was already heavily involved in coaching and loved the challenges presented by getting to the root of a player’s problem area.  Early on I would watch players hit literally dozens of shots before offering any advice as to where they were going wrong – I instinctively realised just how important it was that I understood their game myself before passing comment.  As my coaching style has evolved over the years, it has become more and more straightforward and this remains the cornerstone of my coaching.  It still gives me great pleasure when someone tells me that where they had once thought the game confusing and full of contradictions, it now seems very simple.

I am not what I would call a “method” coach; instead, I firmly believe that the individual human element of the game dictates that there must be a million or more ways to play well although there are, without doubt, some firm foundations which – if put in place – do make for a far better game.  With regards to the long game, Golf is all about how the ball is struck and flighted, not about how pretty your swing looks – I have seen many a lovely looking swing hit some pretty wild shots as well as some very, let’s say, “unique” swings that work consistently well for that player!

I love to help players at all levels from beginner to professional and have, since 2011, enjoyed coaching Jason Levermore and other professional players.  Jason is one of the most consistent performers in the country, has recently enjoyed success in the BMW PGA Championship and was a member of the historic PGA Cup winning team who beat the USA on their own soil for the first time ever at Cordevalle, California.  Jason’s last nine holes in the singles on the Sunday remain the best nine holes I've ever seen, playing them in seven under par to win on the last hole – a very proud moment for us both!

I am attached to Brett Vale Golf Club in Suffolk, and around 12 years ago I set up a coaching studio at my own home which was hugely successful.  Upon moving home in 2016, I took the decision to build a new, updated studio which has a Golf Simulator as well as cameras and playback TV for swing analysis.  I have found that this relaxed environment, coupled with state of the art technology, really can speed up the learning process.  It’s also a fantastic way to enjoy private coaching and share lessons with a friend if you are looking to improve together.

I’d be happy to hear from you with any queries you may have and really look forward to helping you take your game to the next level.